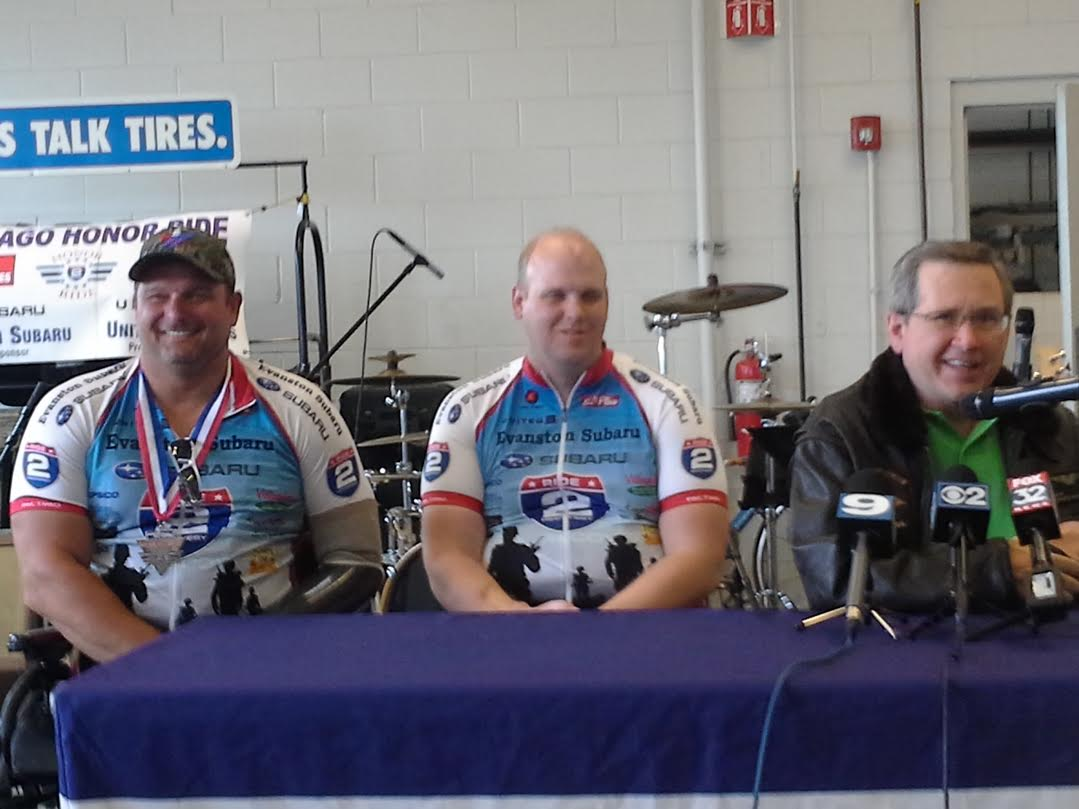 Over 1 million veterans have been injured in the Iraq and Afghanistan wars, according to the United States Department of Veterans Affairs as reported by the International Business times.

Senator Kirk congratulated the organizers of the event their initiative to support veterans. He is also a veteran.

Kirk informed “As chairman of the Military Construction and Veterans Affairs (MilCon/VA) Appropriations Subcommittee, I authored the fiscal year 2016 MilCon/VA appropriations bill that increases VA funding by $4.2 billion, or 6.5 percent. By funding veterans’ medical care at a record $59.4 billion, we can provide Illinois’ 700,000 veterans with the care they deserve“.

According to Senator statement over “ $ 232 million will be used for traumatic brain injury treatments”.

Senator Kirk joined John Masson, an Army National Guard veteran who served in the Armed Forces for 13 years. Masson served in Operation Desert Shield/Storm, Operation Iraqi Freedom and Operation Enduring Freedom. Masson is a triple amputee who endured two years of recovery and rehabilitation at Walter Reed Medical Center and Bethesda Naval Hospital. Since his recovery, Masson has become a motivational speaker and tries to inspire others by sharing his recovery story.

Tanner Hoag, a United States Army veteran with over 17 years of service experience who suffered a Traumatic Brain Injury (TBI) attended the event as well. It was Hoag’s first honor ride.

About 300 cyclist completed 18. miles, some 50. miles ride last Sunday to raise awareness and funding for Ride 2 Recovery, which gives individuals the opportunity to meet and ride with recovering military heroes.

Ride2Recovery started and ended in Skokie, Illinois in 2015. This was a one day ride/run to raise money and promote awareness for Ride 2 Recovery Programs. Ride 2 Recovery hosts numerous Honor Rides across the country and around the world each year. The Chicago event offered three non-competitive routes foor all skills levels: runners a 5K route. Routes were from 18 to 50 miles, depending on rider’s ability. The run was a 5k on the McCormick Trail.

About 300 cyclists, runners participated in CHICAGO HONOR RIDE and RUN. There were a few dozens of supporters as well. Some of them were clapping hands for every cyclist and runner who finish the route and 5K race. Every cyclist and runner got a special medal for completing the race and for supporting veterans.

During the conversation with Rob Paddor, President/Co-Owner of Evanston Subaru I have learned that he has been involved with military causes for many years. He has personally participated in numerous Honor Rides and 10 Ride Recovery Challenges, including the 9/11 Challenges, Normandy Challenges. Gulf Coast Challenge, Texas Challenge, Minuteman Challenge and the Great Lake Challenge.

In April of 2012, Rob was honored to be invited to participate with former President George W. Bush in the W100, a 3-day, 100 mile, mountain bike ride in Texas. The W100 included 20 injured servicemen and women from conflicts in Iraq and Afghanistan.

Medical dogs are trained to provide emotional support for Veterans.

The Honor Ride Series promotes these noble causes around the United States. Some organizers came from other states as well.

Chicago Honor Ride& Run. It was “A Day to Remember in Skokie”.