The exercise was attended by public officials: Alderman Raymond Lopez, Alderman Willie Cochran. There were number of city, federal evaluators.

The exercise was a simulated incident involving a fire onboard an aircraft volunteers posing as victims. The exercise was intended to evaluate the capability and effectiveness of emergency responders in the event of an actual aircraft emergency.

The airport is required by the Federal Aviation Administration (FAA) to hold a full-scale airport emergency plan exercise at least once every three years. “The safety and security of our travelers and employees is our top priority at Chicago’s airports and that’s the reason we’re here today,” said Chicago Department of Aviation (CDA) Commissioner Ginger S. Evans.

It is important to mention that Commissioner Ginger S. Evans has started her new job in Chicago since June 1, 2015.

“We hope that we never have to experience a real incident like this simulated one, but it is the important training and experience gained today that will ultimately help save lives in the event of an actual emergency.”

Approximately 90 volunteers from the North Chicago Naval Station as airline passengers in the scenario, with injuries simulated through “moulaging,” a technique that uses theatrical makeup.

The two-hour exercise started at 10 a.m. and did not impact regular airport operations.

The CDA made announcements to passengers in the terminal at Midway International Airport during the exercise indicating that a simulated training incident was taking place.
The requirement to test airport/airfield emergency response capabilities is mandated by the FAA, and is a condition precedent to U.S. airports’ operating certification by FAA standards.

Full-scale emergency exercise was a result of months of preparation by hundreds of competent and dedicated professionals. Many of them have dedicated their careers and lives to provide public safety at the airports, in the City of Chicago and in surrounding communities. They deserve our appreciation and recognition.

It was also very interesting to meet Rev. Michael G. Zaniolo, the Chaplain from the Interfaith Airport Chapels of Chicago and to talk with him and another spiritual leader about serving spiritual needs for millions of passengers who use the Chicago Airports.

Safety of passengers, workers in Chicago airports is the highest priority for during such emergency exercise and during daily operations of the Chicago Department of Aviation. 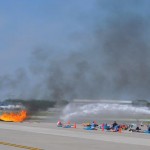 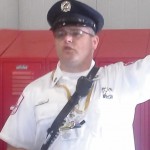 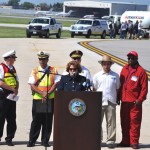 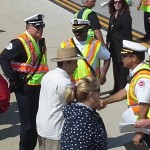 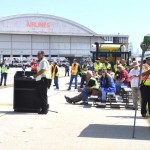 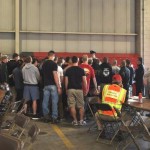 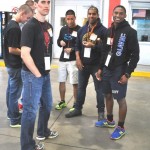 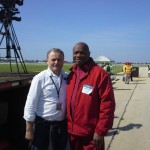 @ Andrew (Andrzej) Mikolajczyk
@ photos by A. Mikolajczyk and Courtesy of CDA Media Relations;/kp
~ ~ ~ ~
The Chicago Department of Aviation (CDA) is self-supporting, using no local or state tax dollars for operations or capital improvements at O’Hare and Midway International airports. Together, Chicago’s airports generate more than $45 billion in annual economic activity and create 540,000 jobs for the region. Please visit www.flychicago.com to learn more about the Chicago Department